How To Use Hibi Incense Matches

Curious about how to use incense matches by Hibi? If you're looking to add a short burst of beautiful scent into your home, check out our Hibi guide here. We've included step-by-step instructions, helping you get the most out of this ingenious style of home fragrance.

Discover how to use Hibi Incense Matches to bring a short, beautiful burst of fragrance to your home. This unique style of incense is the perfect way to create a cosy, reflective environment within your home in a short space of time. Light up and enjoy a peaceful moment surrounded by stunning scent.
Share on facebook
Share on google
Share on twitter
Share on pocket

Crafted in Japan, Hibi Incense Matches combine the traditional incense of Awaji Island with the matches of Harima. The result is a unique style of fragrance that requires no additional lighting device.

Designing Hibi took master craftsmen over three years to perfect, using a combination of trail and error, and traditional skills. Each small Hibi box contains 8 fragrant incense matches, along with a specially designed heat resistant mat on which to lay the match as the tendrils of fragrant smoke curl up into the air.

Utilising the techniques coming from Europe, domestic production of matches started at the beginning of the Meiji period. Later, Japanese matches became so popular as export goods, thanks to the quality, that match manufacturing developed as a specialist local industry of Hyogo, including in Harima.

Incense manufacturing technique was brought to Awaji Island by craftsmen of Sakai in 1850 during the last days of the Tokugawa shogunate. Thanks to the westerly winds that are characteristic of the island and ideal for drying incense Awaji Island has become the biggest incense manufacturer in Japan. 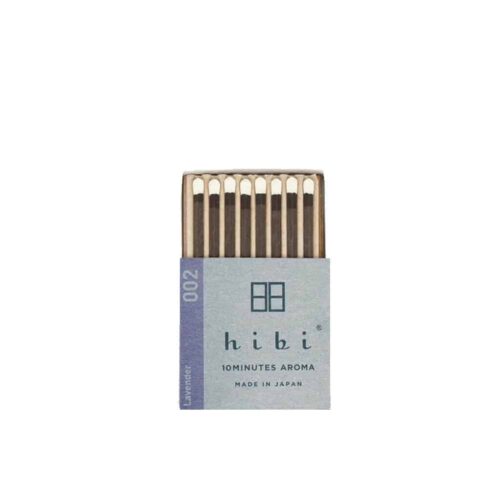 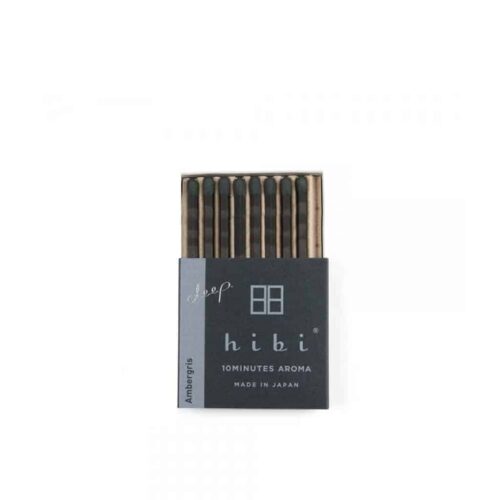 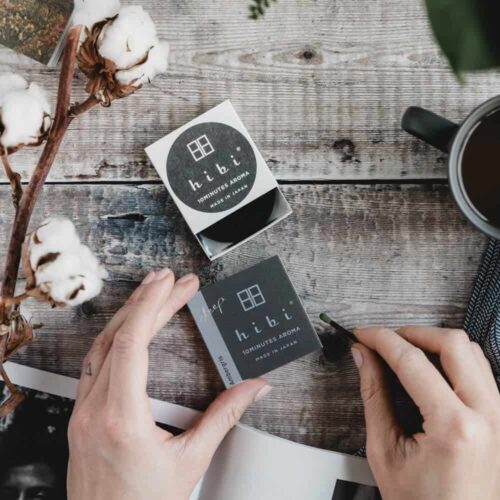 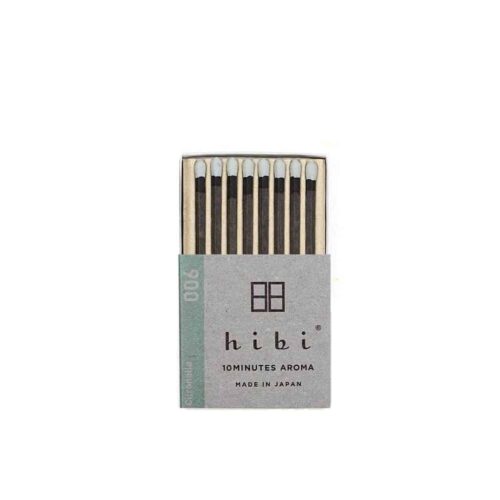 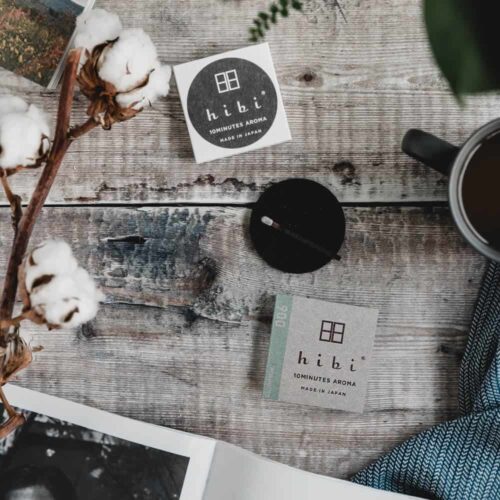 How To Use Hibi Incense Matches

The incense is delicate. Be careful when using it, as it may break if you don’t strike it correctly.

Remove the package film. Pull the perforated part of the film sideways to the left and right to open the package.

Take out a stick of hibi and press its top tip against the brown rough surface on the side of the box (the side for striking) at an angle of 45 degrees, and scrape it diagonally down to light it. Hold the stick at its mid-point as it might break easily if you hold the far tip of the stick to strike it.

Once it’s lit, hold it in a slightly head-down tilted position than in a horizontal position, and keep holding it until the flame spreads to the incense part and the flame settles on its own. If you put out the flame hastily before it settles, the fire many not spread to its incense part or the smell of the match may affect the initial fragrance of the incense because the flammable material in the match head (ignition material) may not have burned completely.

Lay the stick on hibi’s exclusive mat and enjoy the scent for around 10 minutes. You can put it on the desk as the exclusive mat and tray are heat-resistant. If you are concerned, place it on top of the slide cover of the box to ensure safety.

After the match has burnt out, lift the stick together with the mat and throw away any remaining ash. Each time you use Hibi, you should make sure there is no residual ash left on the mat as this may cause the scents to mix and not be as enjoyable.

The Best Scented Candles To Elevate Your Workspace

Everything You Need To Know About Candle Wax

Our standard delivery service takes between 3 to 5 working days. You will receive tracking details as soon as your order has been dispatched from our warehouse.

Our express delivery service takes between 1 to 2 full working days. You will receive tracking details as soon as your order has been dispatched from our warehouse.


We use a variety of couriers, choosing the one we hope will be best suited to delivering your order in a timely, safe manner. We aim to dispatch all express orders within 24hours, and will let you know as soon as possible if any issues or delays arise.

Where possible, we will endeavour to send all the items in your order together, however any items out of stock will be sent as soon as possible. Please note – you will only be charged one delivery cost per order. If any part of your order is out of stock, we will notify you and advise of the anticipated delivery date.

All delivery dates are estimates and we cannot guarantee specific deadlines. Saturdays, Sundays and all Bank Holidays are classed as non-working days.

CHAT - Just press the purple question  mark in the bottom right-hand corner of this screen to send us a quick message.

EMAIL - You can email us at [email protected]

PHONE - 0800 910 1198 (Please accept our apologies if we don't reach the phone in time, our team might be busy helping instore customers. We will get back to you as soon as possible.)

We want you to be delighted with your purchase from Osmology. But if you’re not, you can easily return your purchase within 30 days of receipt as long as it is unused (not lit!) and in its original packaging.

We will be happy to exchange the item for a replacement or refund via the original payment method. Unfortunately we are unable to refund any shipping costs but we will send any new exchange items free of postage charges.

Please email [email protected] so that we know to expect your return and can give you the correct return address details.

Parcels are returned at your own cost, and we recommend that you obtain a free certificate of postage from the Post Office as we are responsible for your parcel only once it has been received into our warehouse. Items lost in transit will not be treated as returned.

Please also make sure your items are securely wrapped so that they are returned to us without damage.

Join our VIP newsletter and be the first to know about new arrivals, amazing sales, exclusive offers, and special events.

We process your personal data as stated in our Privacy Policy. You may withdraw your consent or manage your preferences at any time by clicking the unsubscribe link at the bottom of any of our marketing or transactional emails, visiting the My Account page or by emailing us at [email protected].

We use cookies to ensure that we give you the best experience on our website. If you continue to use this site we will assume that you are happy with it.OkPrivacy policy